Home Technology Which are the Top 3 Graphic cards used in PC’s and 24*7... 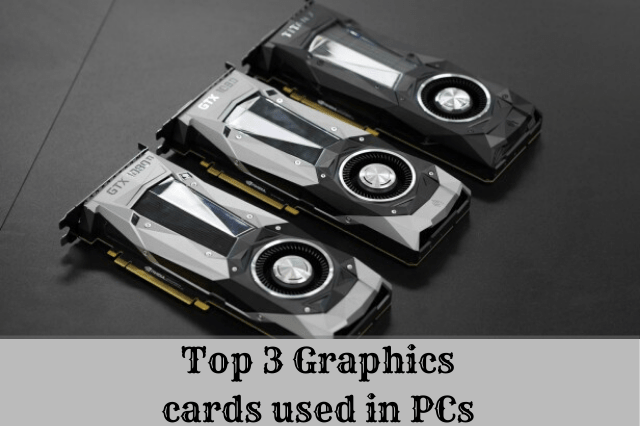 Are you looking for the best graphics card? Well, this task of finding the apt one in your budget is quite daunting. But no worries, after reading this article you will get some clear idea for finding the best graphic cards. Before heading to the list of best graphics cards, you must know the actual role of GPU ( Graphics Processing Unit) in your PC’s performance. Faster GPU provides you with the advantage of extra speed during gaming, and besides its use in gaming, it speeds up the processing of other applications used during video editing.

As you know, the graphics card helps in producing the image which your monitor displays. And for better pictures, you surely need the best graphics card. If you are a professional gamer and video editor, then the best quality images are your priority. Therefore, if you are about to buy a new graphics card, then keep the two points in your mind before proceeding further:

With these two clear answers in your mind, it becomes quite easy for you to pick the right one from the long list of graphics cards. Although the two very famous professional cards usually preferred from AMD or Nvidia only. There are different models of the Nvidia Super cards like the 2080 Super and newer RX 5700 Radeon cards.  In terms of performance, the Nvidia RTX 2080 Ti is best known, but it’s slightly costly in comparison to the Radeon RX 5700 XT. You can choose the GTX 1660 Super for tighter budget. On the other hand, there are expanded choices of best graphics cards available for every type of user and with the release of  “Nvidia’s GTX with the latest control pannel “ and RTX Super cards, the options have expanded.

The various best graphics cards below mentioned for you to choose as per your convenience and budget.

This latest and powerful  RTX 2080 Ti is the most preferred one by the largest number of consumers. It holds a 60 per cent largest Turing TU102 as compared to the Pascal GP102 in the 1080 Ti, has 55 per cent more transistors. Although Nvidia didn’t stop here only as it has Tensor cores which help to pick up the pace of deep learning algorithms like DLSS, plus RT cores to accelerate ray tracing. With its ample of other interesting enhancements, it is gaining popularity among the users. Have a look at its features below:

In the era of gaming if you are looking for a combination of performance and budget, then AMD is the best graphic card. You can pick this one for 1080p on a budget.  This card is the apt one for those who still prefer to use the integrated graphics or an older card. Although it holds only 4GB VRAM, it is often faster in DX12. Just take a look at its feature below before making a final choice.

Besides these above best three graphics card you can also adopt the graphic cards from the below list:

Make a wise choice to buy a graphics card to enjoy your passion for gaming and video editing at its best. You can easily decide by comparing the performance levels of the best graphics card and can select the one according to your budget and choice surely.

Before investing in the graphics card, do not forget to keep the few basic things in your mind, such as:

Although it is vital to pick the apt graphics card, which gives you a superb performance based on the resolution you are working or gaming.  But to get the best possible performance, you need to be well attentive regarding the latest series of cards as Nvidia named its cards as Pascal, Turing, etc. while AMD has Polaris and newer Vega. With every new generation, Nvidia and AMD bring more advanced features in the industrial market. In simple words, you get the more cores, more bandwidth, and memory with the evolution of a new generation of the card.

I hope, after reading this article, you will buy the best graphics card for boosting the performance of your work or game under your budget